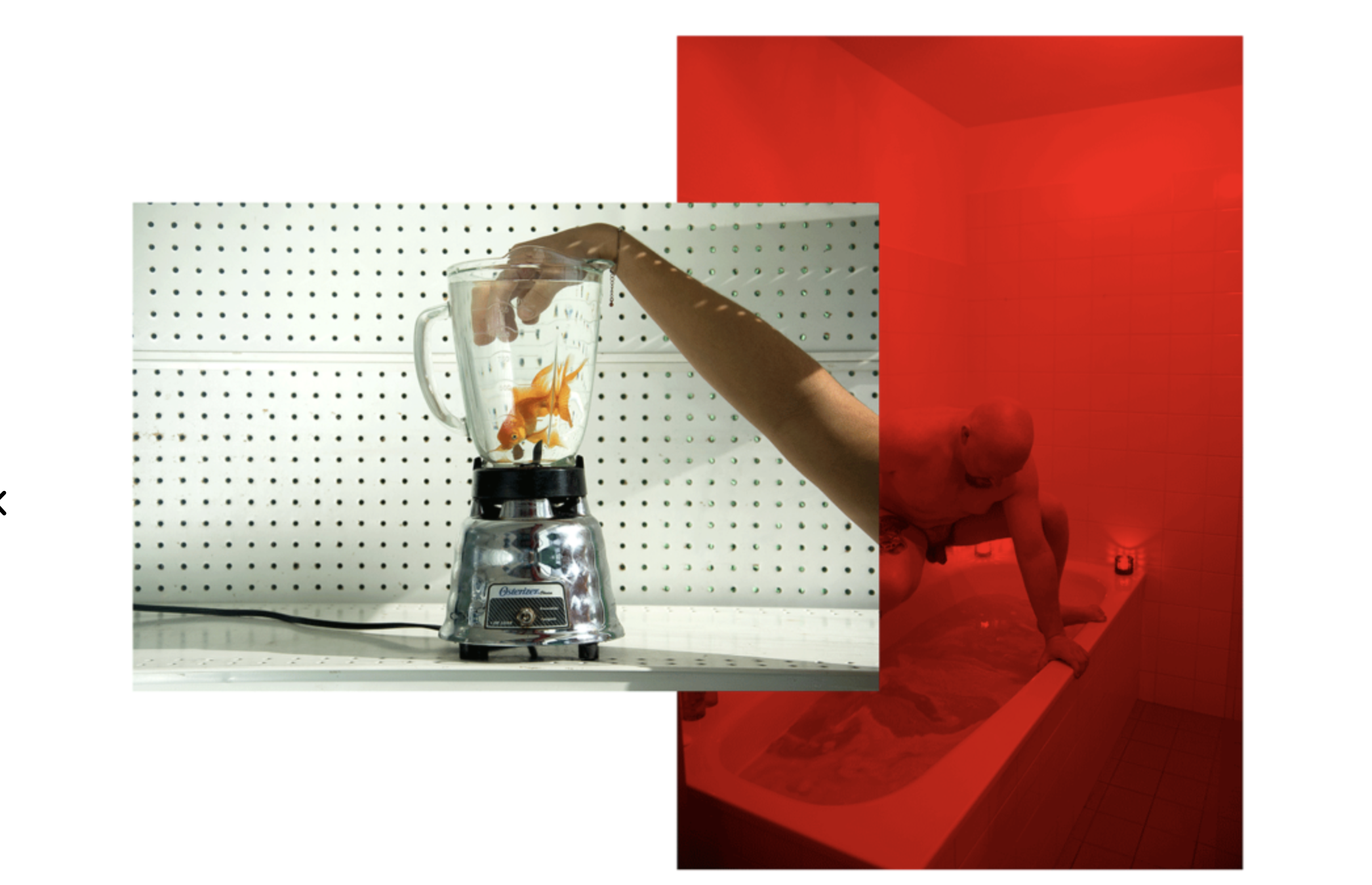 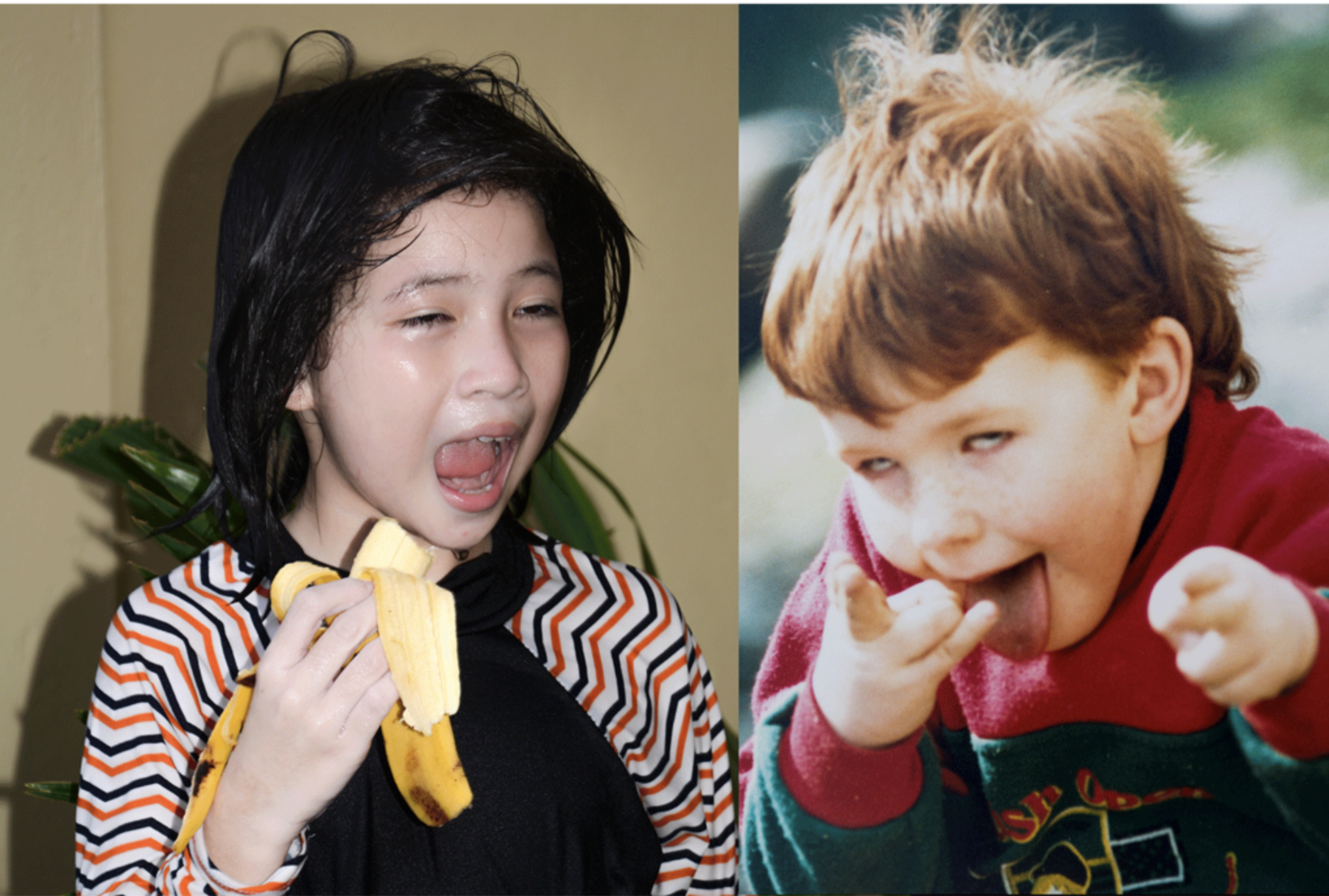 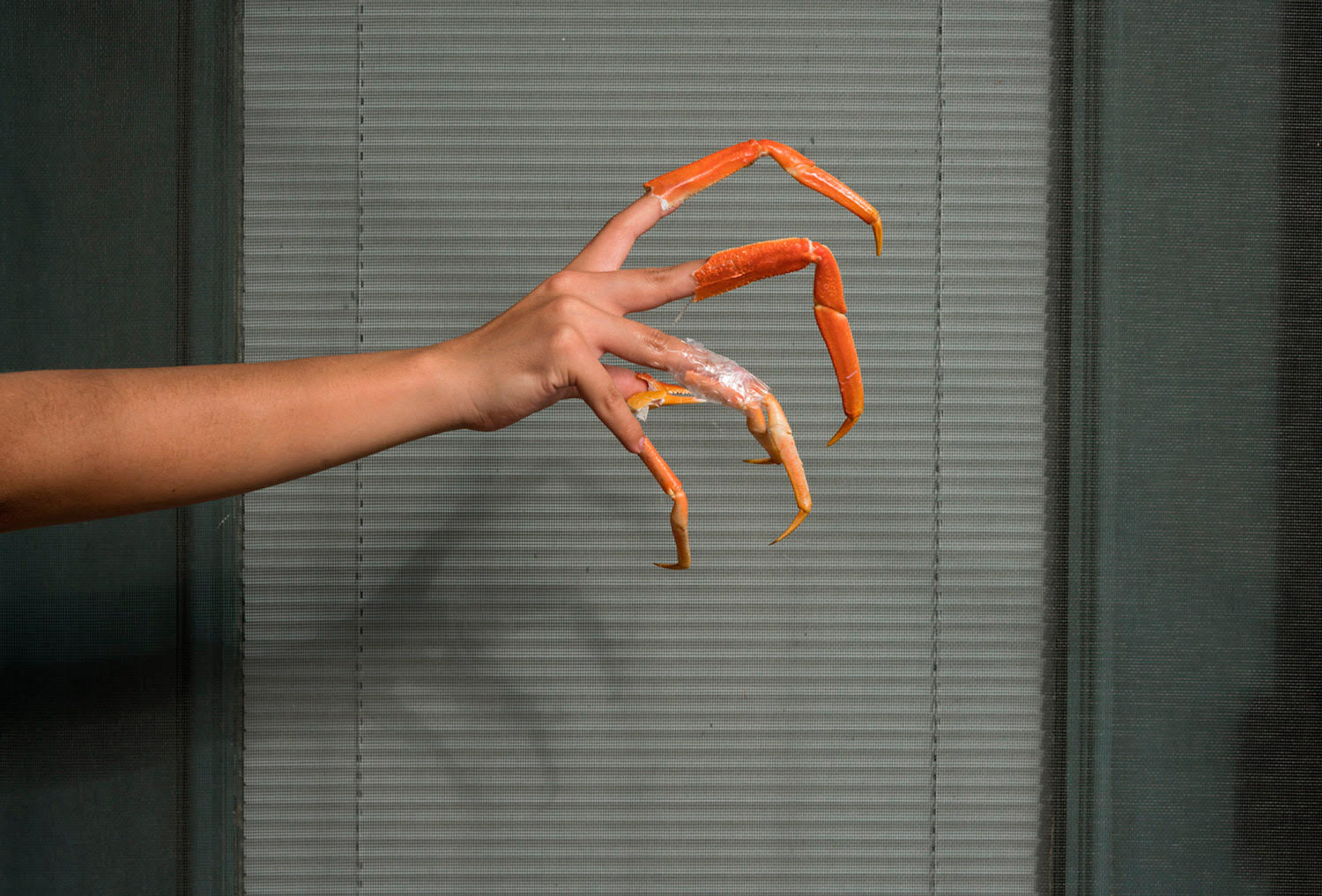 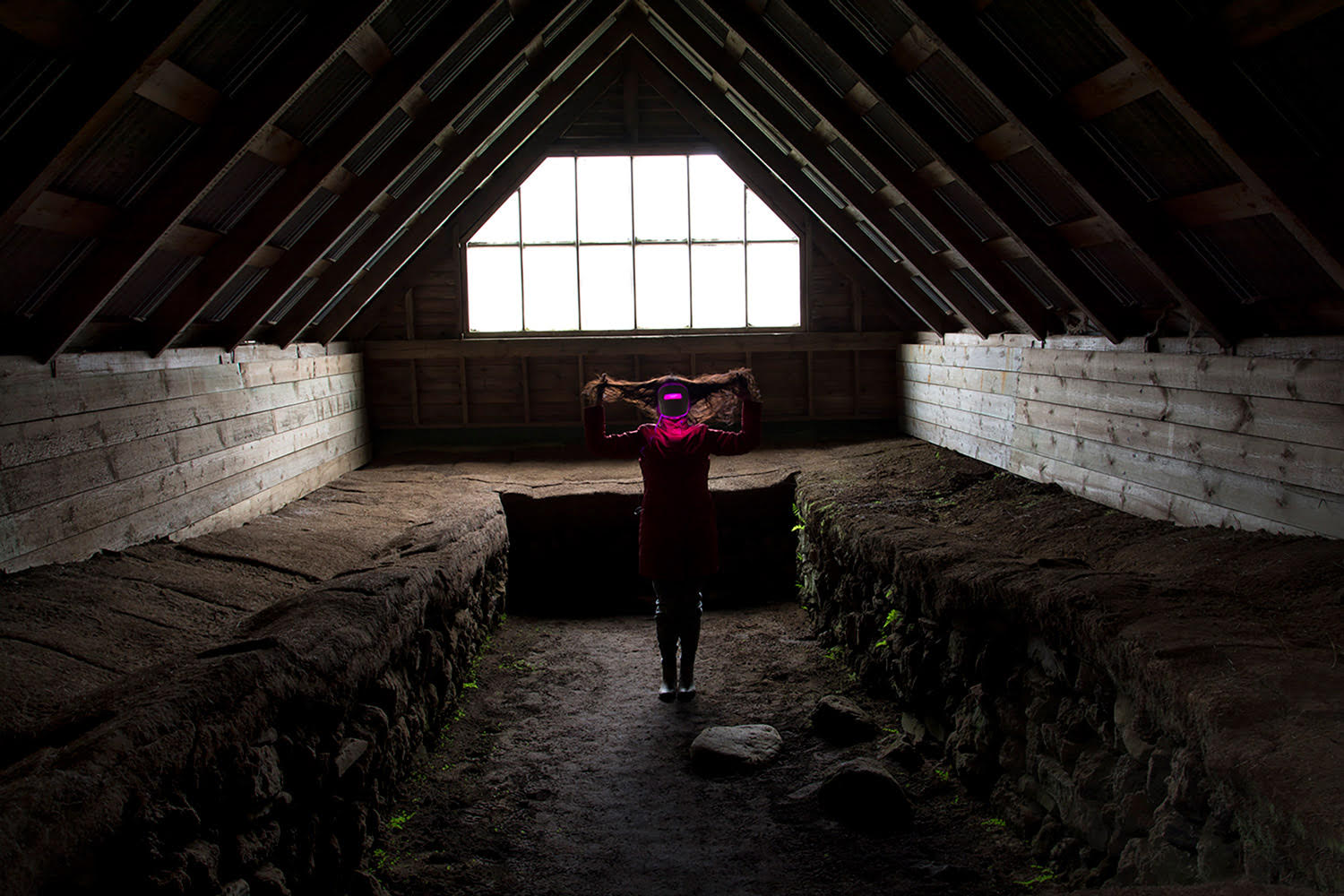 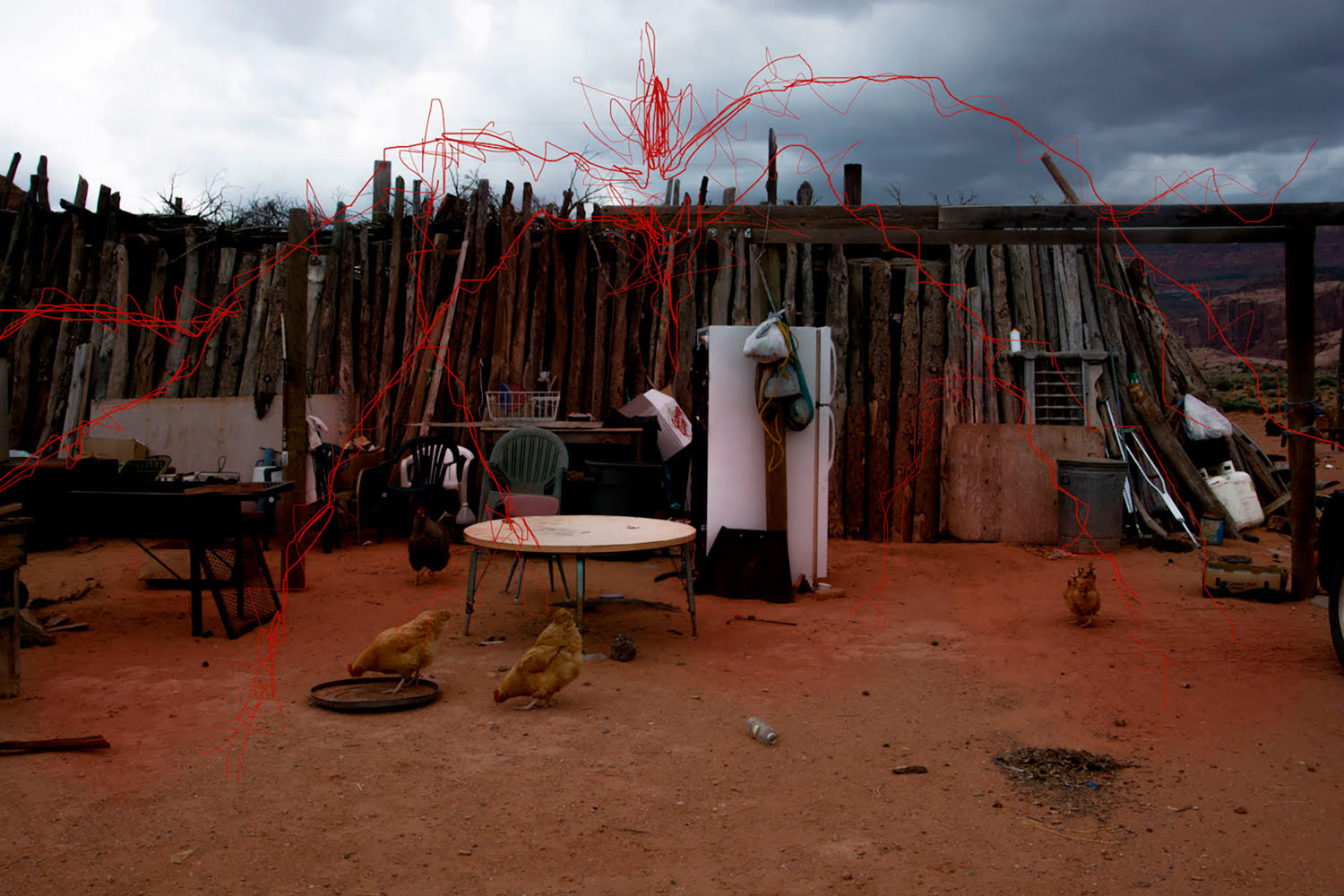 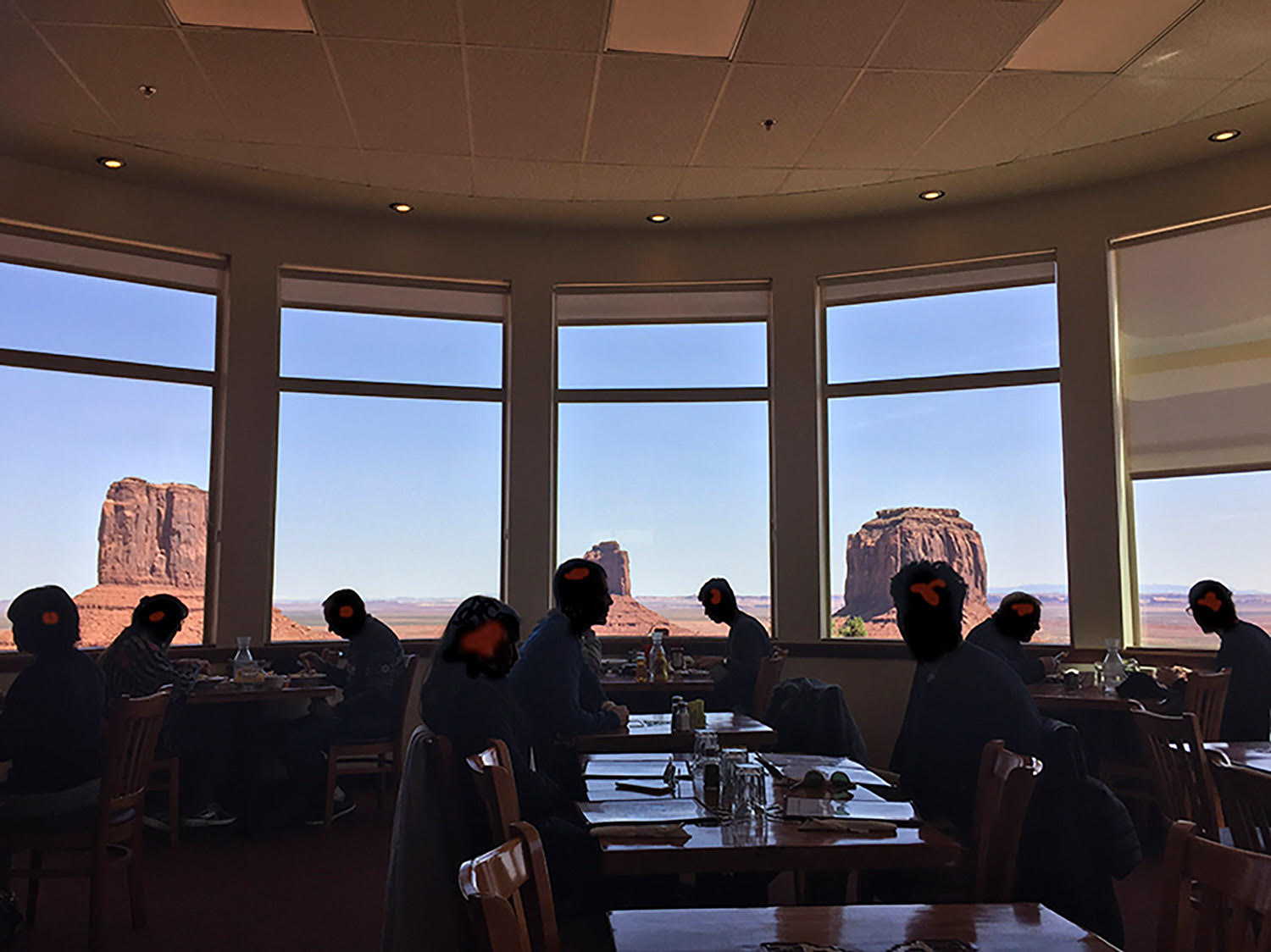 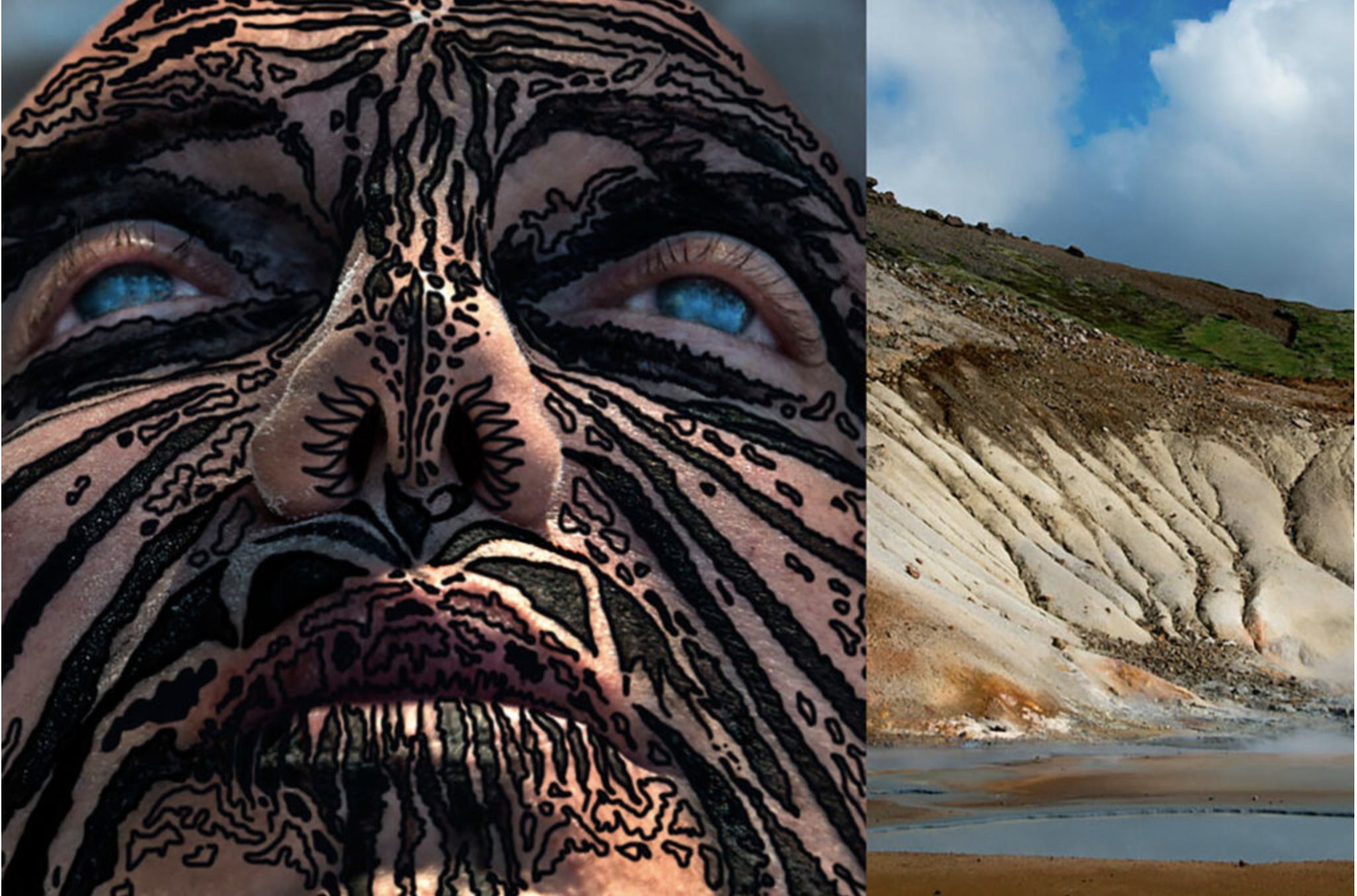 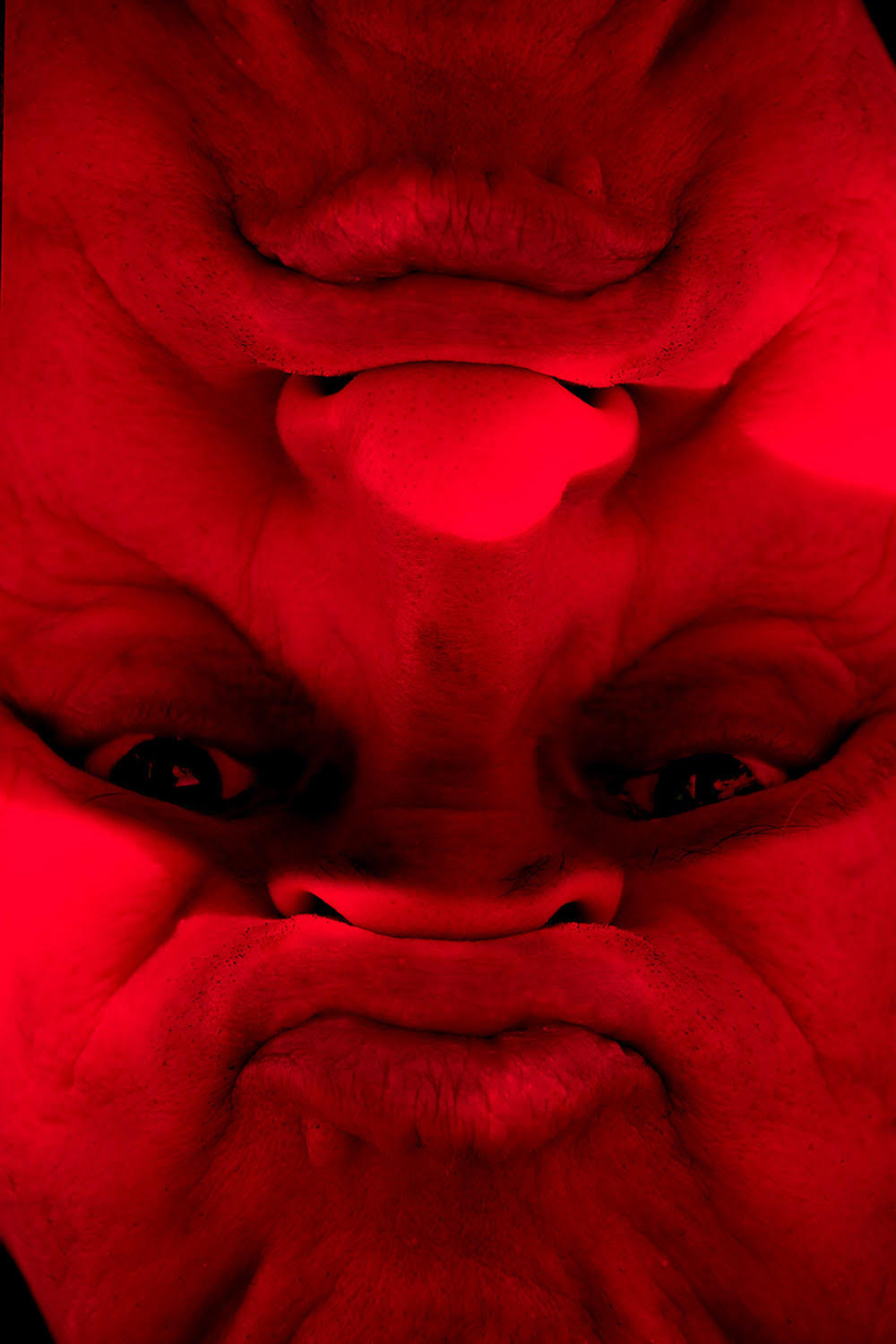 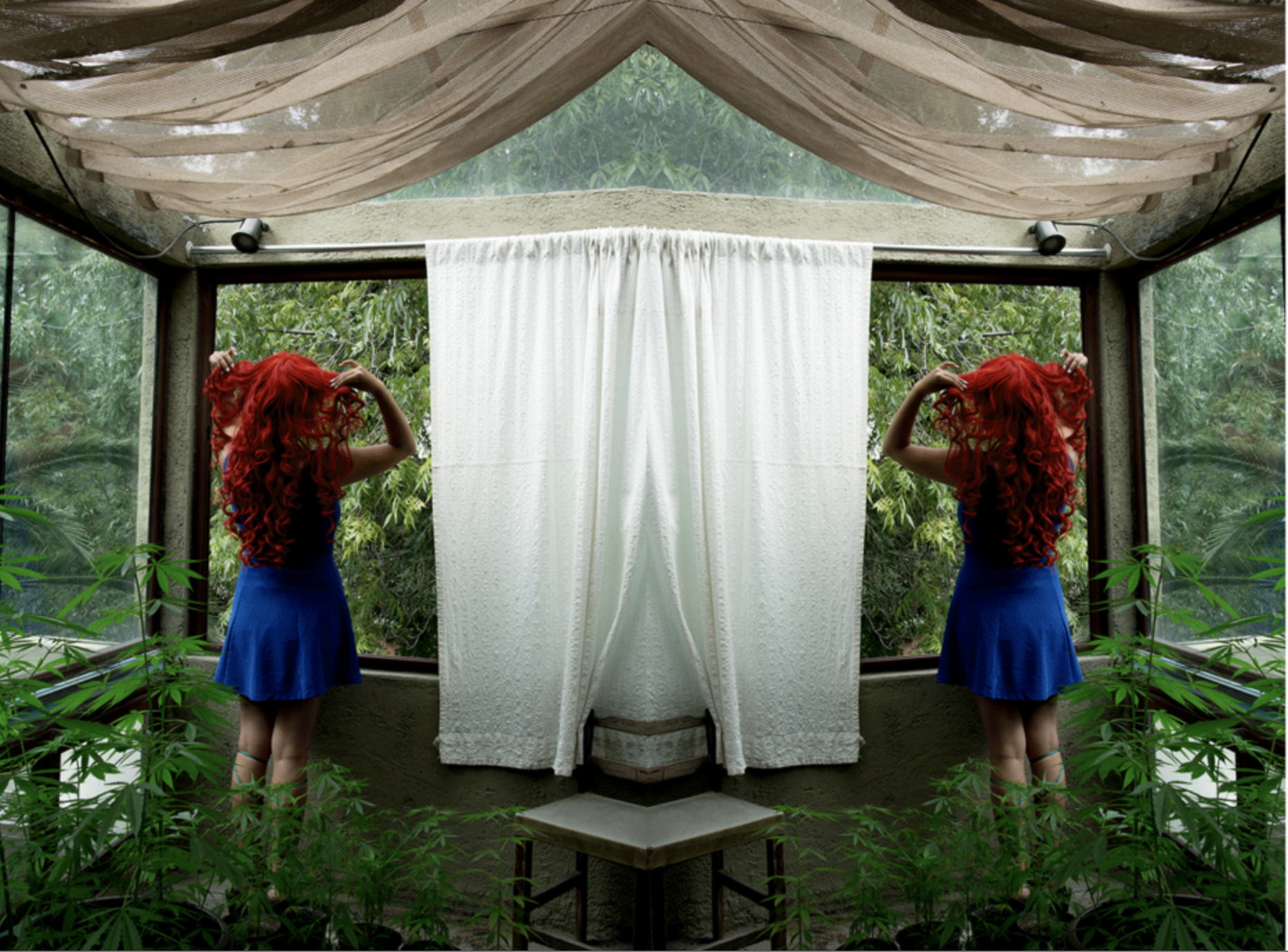 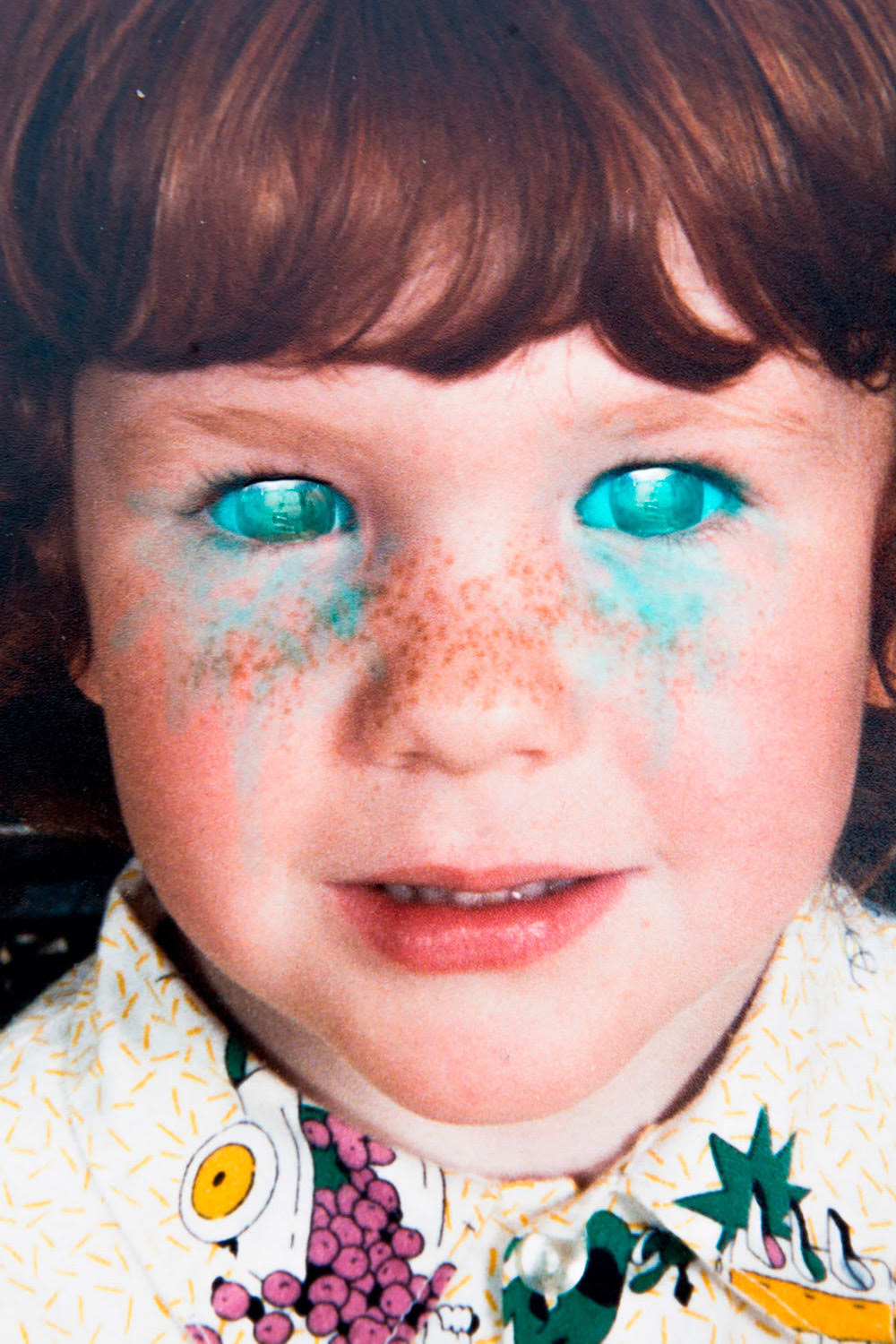 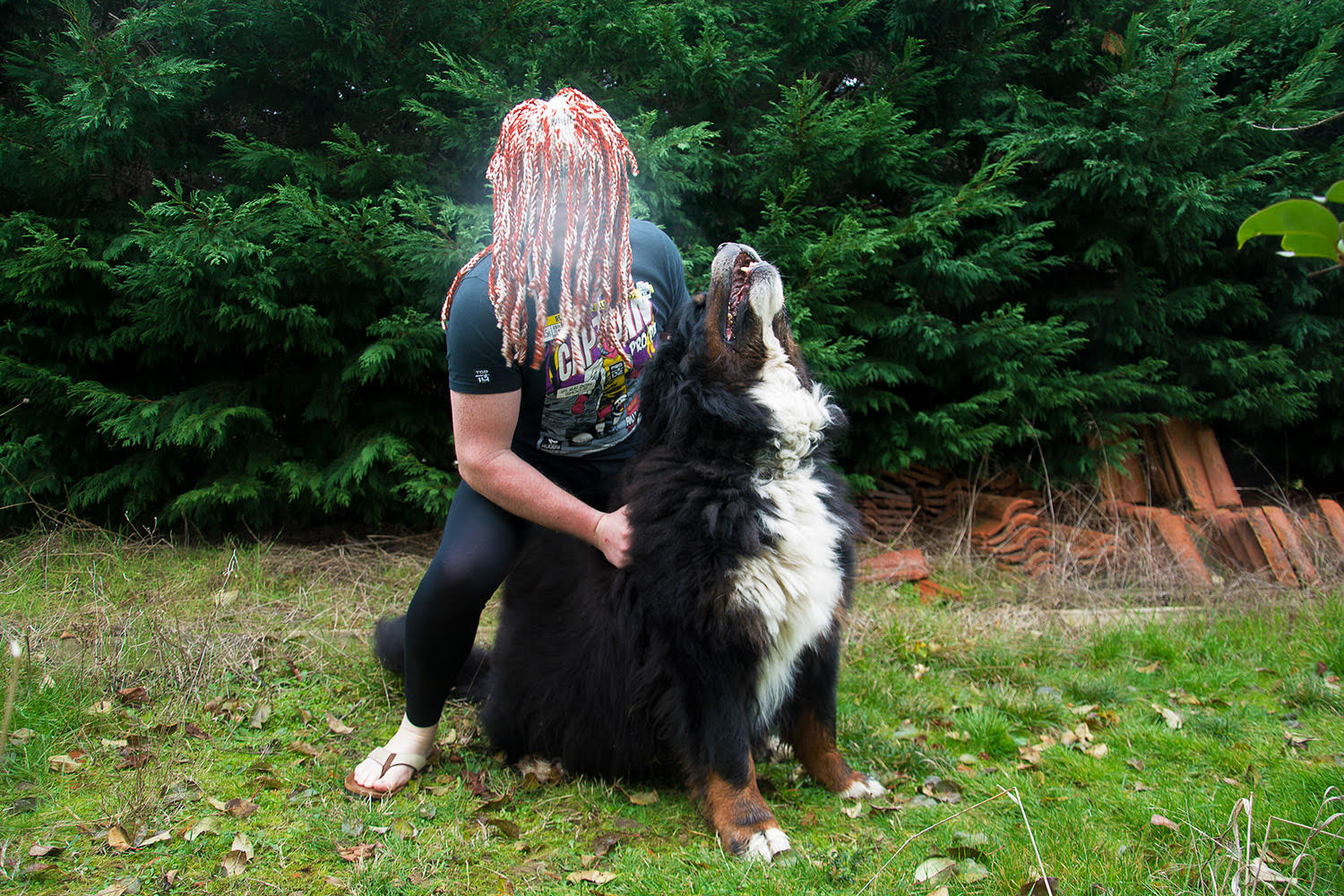 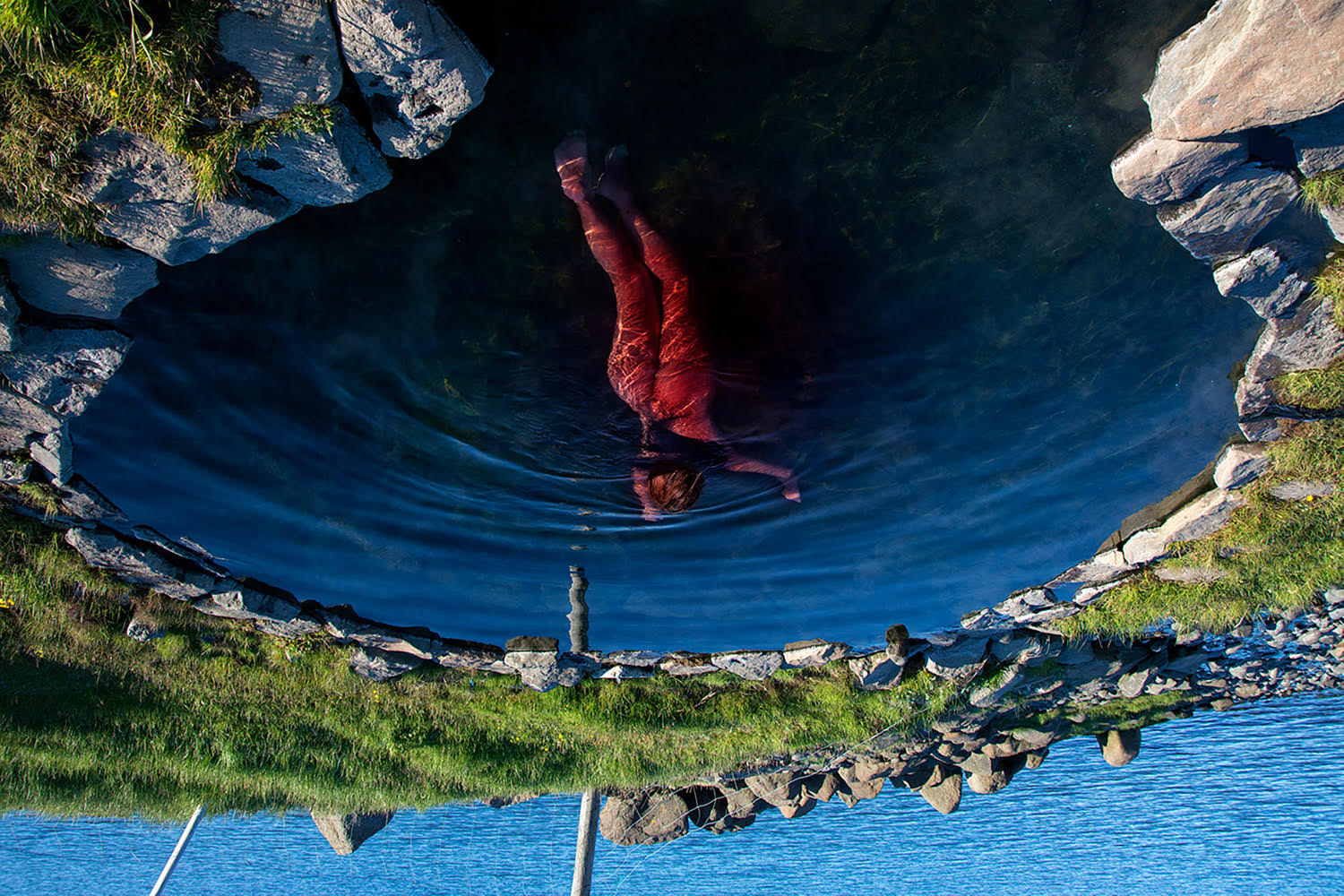 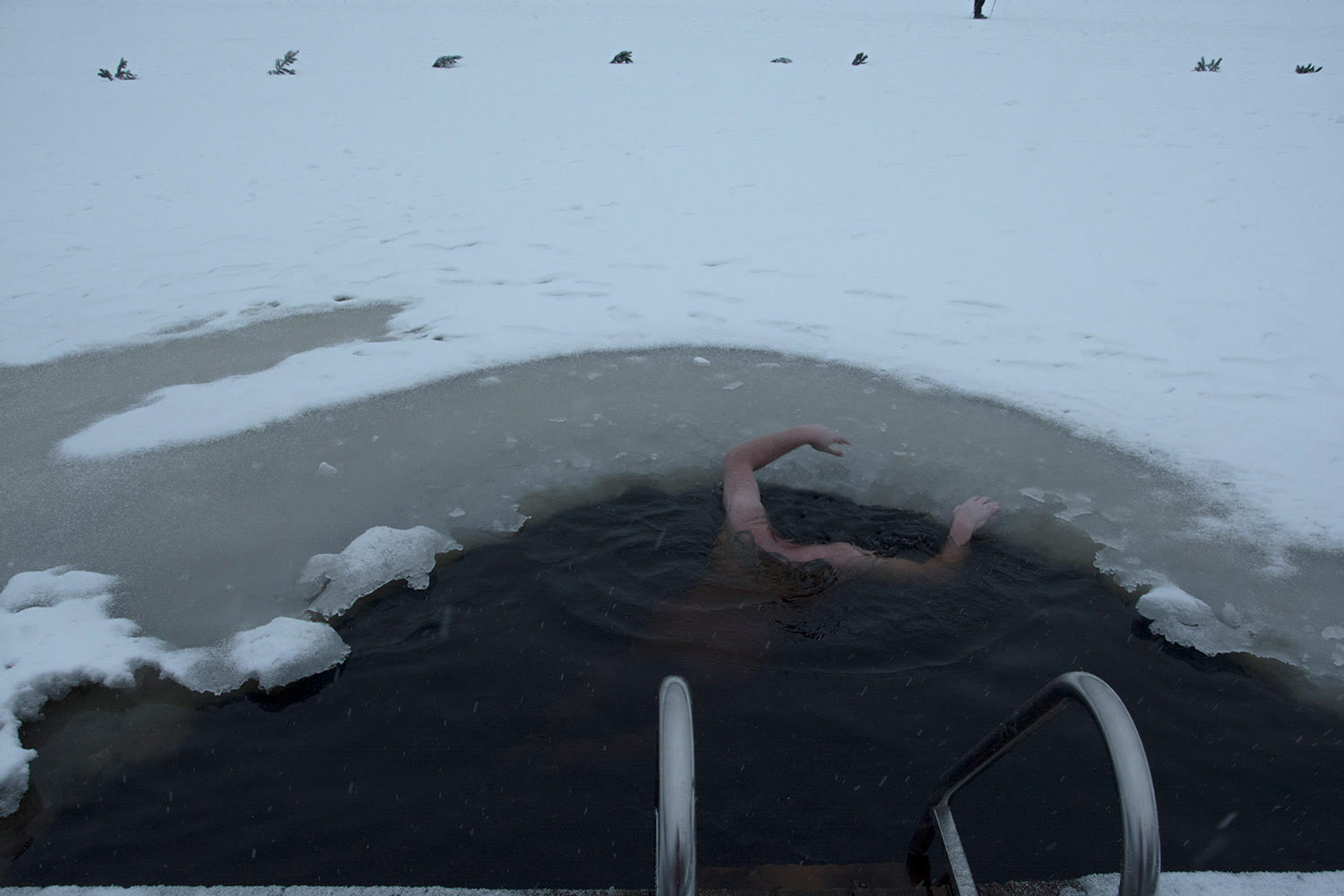 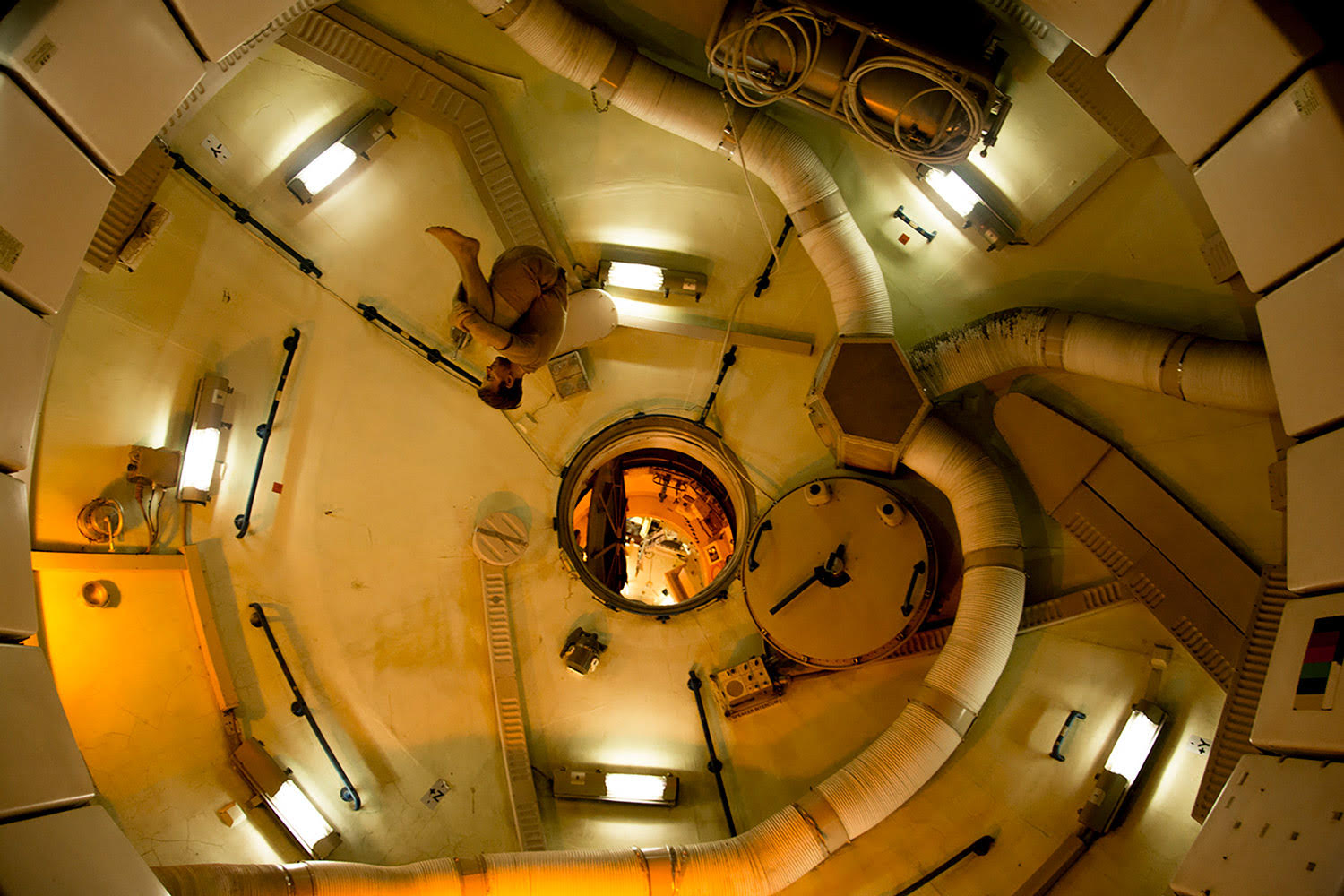 Liza Ambrossio’s Blood Orange is composed of evocative and sensorial images, audaciously strung together, seeped in mystery, humour and unease. The photographs range from a stray arm coming into frame, each of its fingers bedecked and freakishly elongated in bright orange crab claws, casting a nightmarish silhouette on the back wall — to a shot of a retro futuristic pad nestled in tropical forestry, shimmering behind a sheen of 1950s sci-fi — to a strange, seamless mirror image of a horse’s behind, creating an unheimlich alien apparition in the distinctively American desert. The almost harsh realness and sheer surrealism of the series leaves the viewer wondering who is Liza Ambrossio?

Ambrossio is a young Mexican multidisciplinary artist, interested in creating work that allows her to both discover herself and the world, committed to ‘an aesthetic search between the strange and the everyday, being subtle and magical at the same time.’ Her practice combines photography, archival images, paintings, installations, performances, videos and text. The text that sits alongside Blood Orange is equally as powerful as the images, adding depth and shocking context. Indeed, Ambrossio states that ‘oral and written language is the most vital tool of my work.’ Deeply personal and strikingly vivid, her words paint a dark vision of her macabre mental inspirations, beliefs and expectations, as well as giving the reader an insight into the force that moves her to make work and her optimism that ‘passion is an act of defiance’. Ambrossio divulges, ‘the texts that come with my work are inspired by raw moments of extreme detachment written amid madness and total clarity (flashbacks)’.

From engaging with her work and speaking to Ambrossio, it becomes clear that it is hard to disentangle the artist from her art. Her practice is so intertwined with her past and her being, she simply states ‘photography is a state of mind’.There has already been much written about the personal and national tragedies that have touched and shaped Ambrossio’s life – most notably the suicide of her best friend, the impact of being a photojournalist documenting some of the most gruesome scenes of Mexico’s war against drug trafficking, as well as the harrowing relationships with her family members that led to her completely cutting contact with them as a teenager. She reflects on this time as ‘the whole world turning into hell with Dantesque visions’ waiting to become ‘the witch my grandmother said all the women of my lineage were’. However, she goes on to explain that what you see in Blood Orange is ‘is what happens after destroying the world… I discovered that I am not my mother, nor my grandmother, nor my aunts, and we have to travel, we have to have fun. My demons multiply and do not disappear, but I make of them and they of me.’

Speaking of the intentions of Blood Orange, Ambrossio has many, although two particular desires shine out from her. The first being for the viewer to become immersed in her work and encouraged to stretch and flex their imaginations. This objective is underpinned by her fundamental belief that ‘reality is overrated and fantasy underestimated. I believe the richest things in life are fantasy and imagination.’ The second intention that you might deduce from her provocative visual narratives, is summarised clearly by Ambrossio: ‘Blood Orange seeks to address the intimate connections that people have with their own feelings, thoughts, perceptions of gender, sexuality, place in society, identity and morality. These are feelings anyone can engage with.’

“I have the suspicion that to be truly free, it is necessary to see your father die and kill your mother. Or was it the other way around? A part of my mind remains in the dark. My hands sweat, my heartbeat accelerates, a chill runs through my body. I feel the anguish, the temptation, and the desire of those who are about to commit a crime. Or has it already happened? I can’t avert my gaze. Everything is emotionally confusing, amorphous, strange (…) Am I bewitched?? Or am I the witch? My feet are burning.”

It all starts with a mental image: an orange that bleeds. Infected with the aesthetics of Japanese counterculture and Aztec rituals of human sacrifice as a form of poetics, and where cannibalism is presented as a sign to demonstrate contempt for exasperation, I mix performance, spatial intervention, video, installation, techniques of psychological manipulation, science fiction, eroguru, and witchcraft.

Blood Orange was made after years of nomadic life in different countries that have allowed me to build a narrative based on my lucid nightmares, and the practice of free association trying to investigate my discontent in civilization, my discontent with various contemporary conflicts based on individual fear and the hypothesis of a psychological disorder that I have called “paranoid sleep psychosis” after studying experiments and research in neuroscience, neurophysiology and art history.

I think there are ways to show that hereditary traumas, through a load of genetics, can be glimpsed in dreams and symptoms or apparently inexplicable diseases of the body as a way of reading a person’s physical future and behavior in certain cultures, I even consider that it is applicable to entire generations; According to my theory, all of our past decisions, and even those of people of the same genetic line, have a blood weight that leads us inexorably towards the future.

Blood Orange is a contemporary portrait of chaos, and it aims at sublimating the emotional death that I decided to give to my whole family in order to heal from the hatred, anger, and sadness I felt towards the macho orthodoxy in which I was educated. I tell of a necessary exile, which has filled me with obsessions related to the encounter with and the search for my demons.

I don’t know why they have chosen me, and I’m generally too busy to ask myself that question. I have simply accepted them. I am very ambitious, I have many dreams, distressing dreams, from which I need to free myself. Until I meet any of my goals I cannot be at peace. I have already been able to throw everything away: honor, pride, love, security, happiness, everything, as long as it contributes to creating my work and form myself. At the core of this work lies a ritual language that convulsively expresses change, evil and the cursed, mental illness, loneliness, freedom, and destiny.

Faced with the feeling of being uprooted and the need to connect with the deepest origins of humanity, I draw a narrative using the force of instinct and emotional survival in the framework of a world whose laws of life are shaded equally by love and violence. A world where the felt and the lived sometimes merge in a magical or tragic way. This universe is an affront to fear and dehumanization because, according to my beliefs, passion is itself an act of defiance.

Liza Ambrossio (1993, MX-FR) Is a multi-disciplinary artist who lives and works mainly between Spain, France, and Mexico.

She began her artistic practice at the age of sixteen when she asked a ancient maid from her mother’s house to steal the photographs from the family albums looking for traces of a dark past for which there seemed to be no evidence. After the suicide of her best friend, she inherited his job as a “nota roja” photographer (police press), covering murders, accidents and torture by drug traffickers at dawn for a local newspaper. After concluding her university studies at the Facultad de Ciencias Politicas y Sociales in the UNAM, Mexico City, specializing in political journalism and film at U.T (USA), she received multiple scholarships in the United States and Europe, among them; the Descubrimientos scholarship for the Master in Photography and artistic projects at the PIC. A school awarded by the PHotoEspaña festival and the editorial house La Fabrica in Madrid, Spain. She is the author of the book “The rage of devotion” and her work has been exhibited in Europe, the United States, South Korea, and Mexico, including international fairs such as Art Basel, JustMad, Photo London and UNSEEN. Ambrossio’s work has been reviewed by The British Journal of Photography, The Magnum Foundation, El País, El Mundo, Der Greif, GUP, Unseen magazine, Vogue Italy, L’Officiel, and Lens Culture. She has received the FNAC Nuevo Talento award in Spain, Voies Off in Arles, France the same year 2018, the Flash Forward in Canada, the PhEST in Italy and the PHmuseum New Generation Grant. She recently completed the annual photography residence from the Musée du quai Branly – Jacques Chirac in París, France, and she is a member of the Academy of France. Her new book by Kehrer Verlag is published this summer.