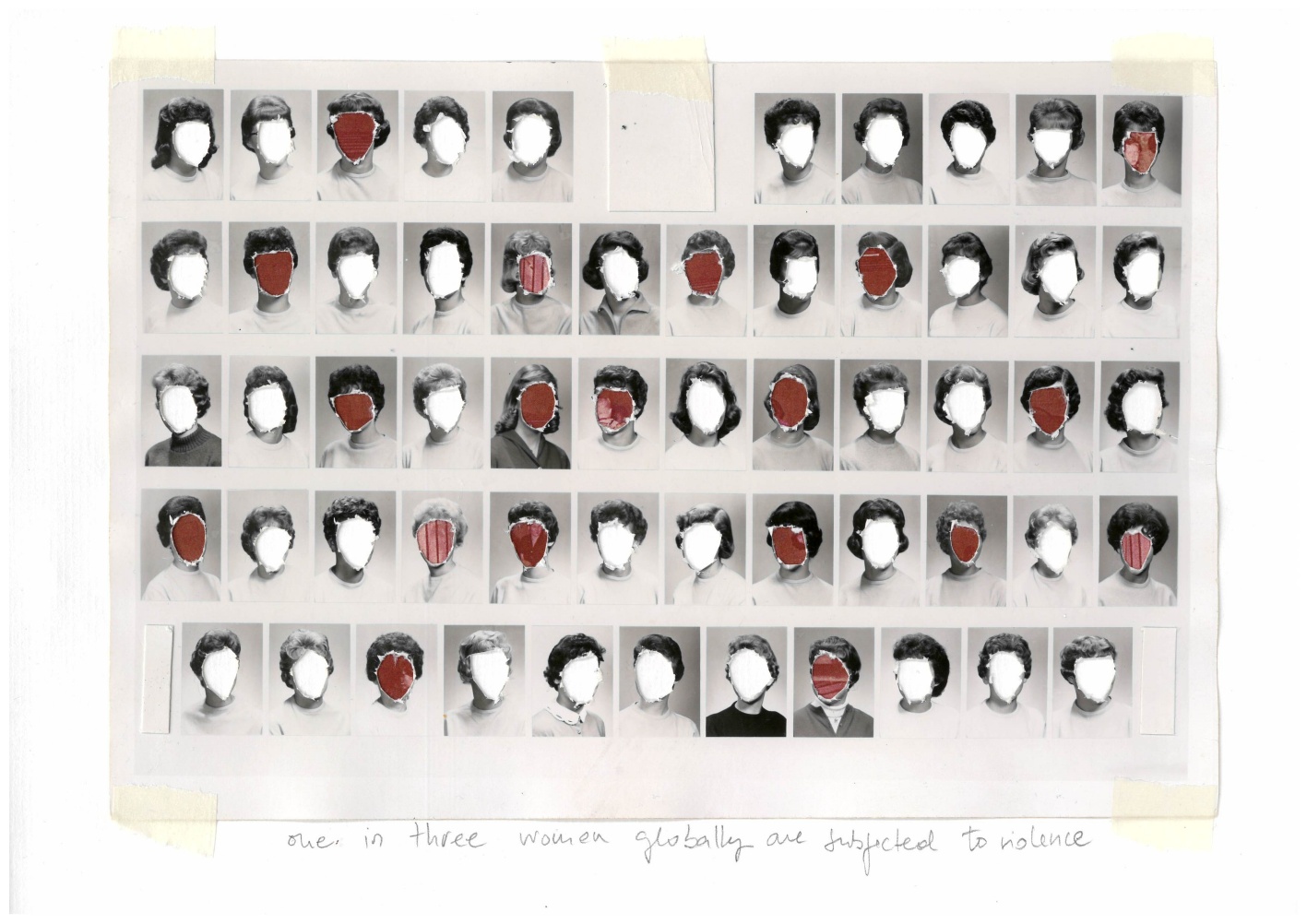 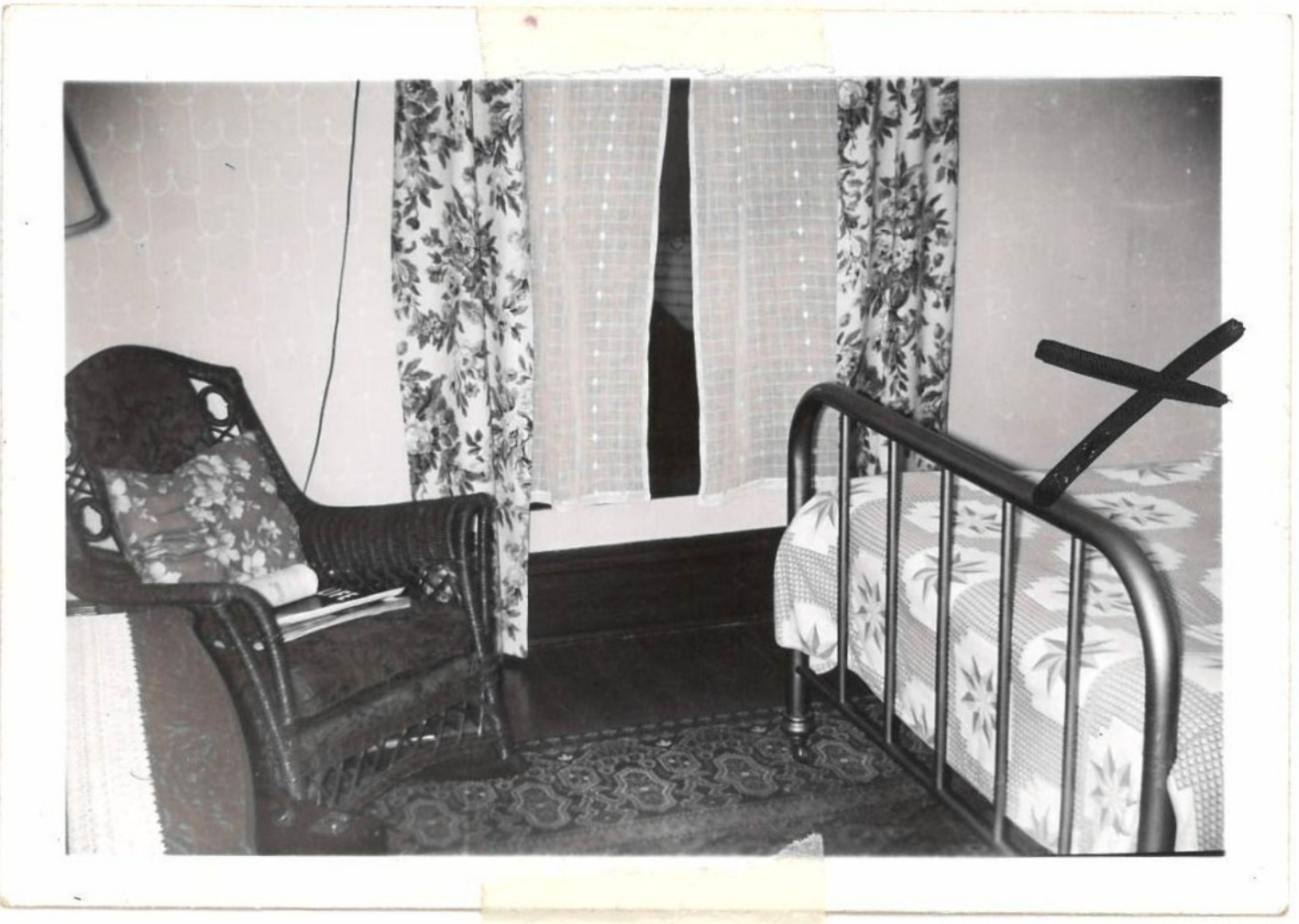 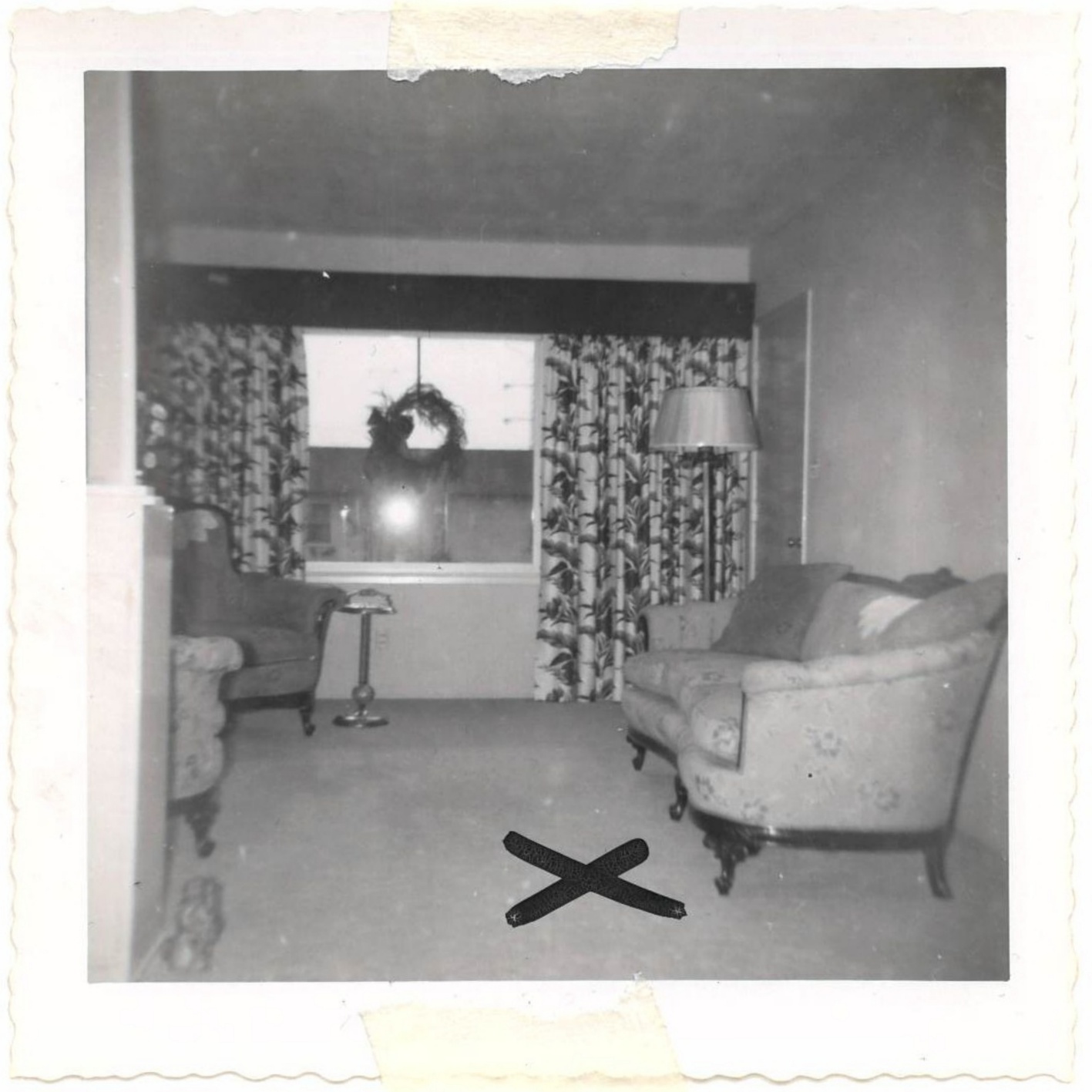 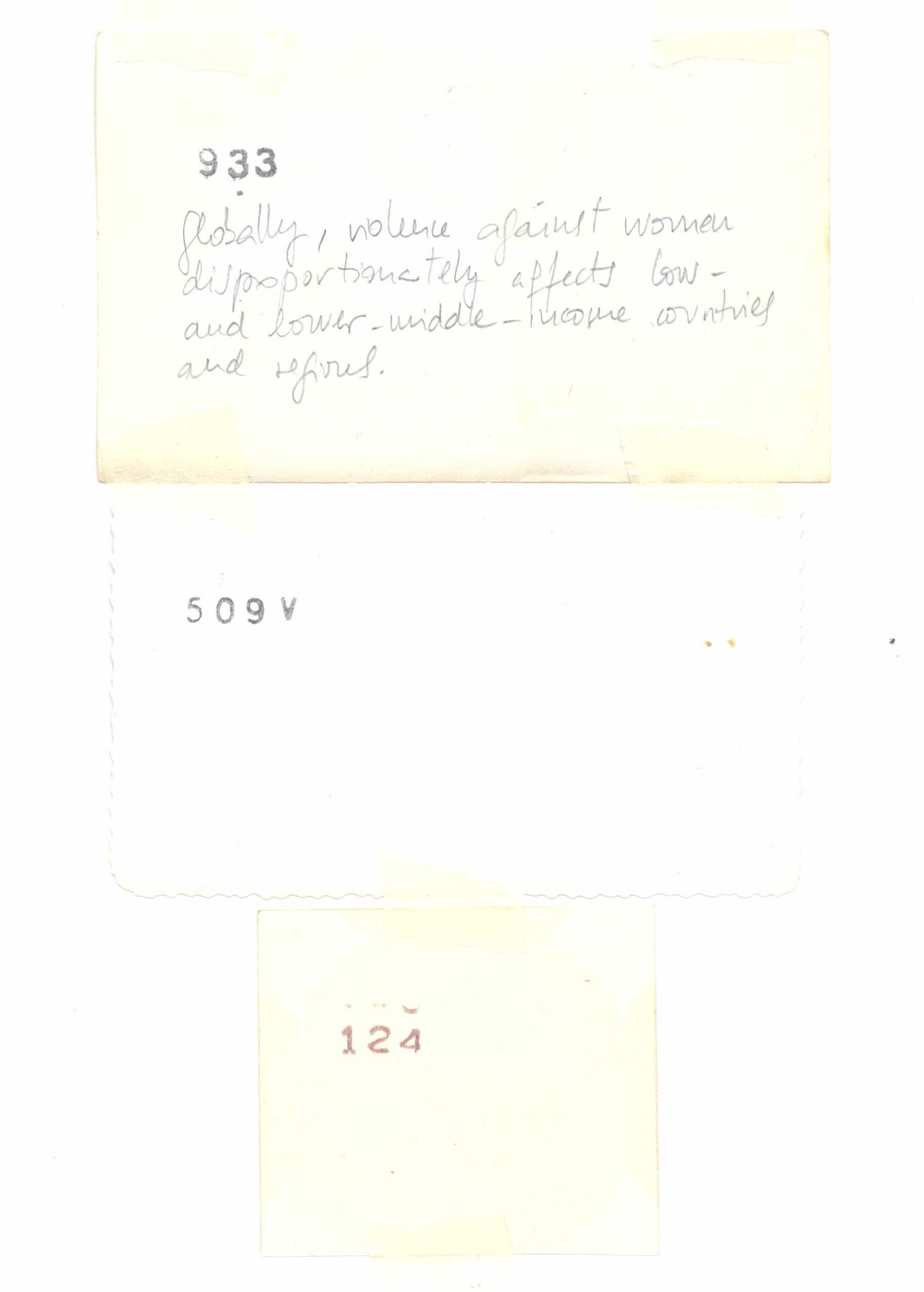 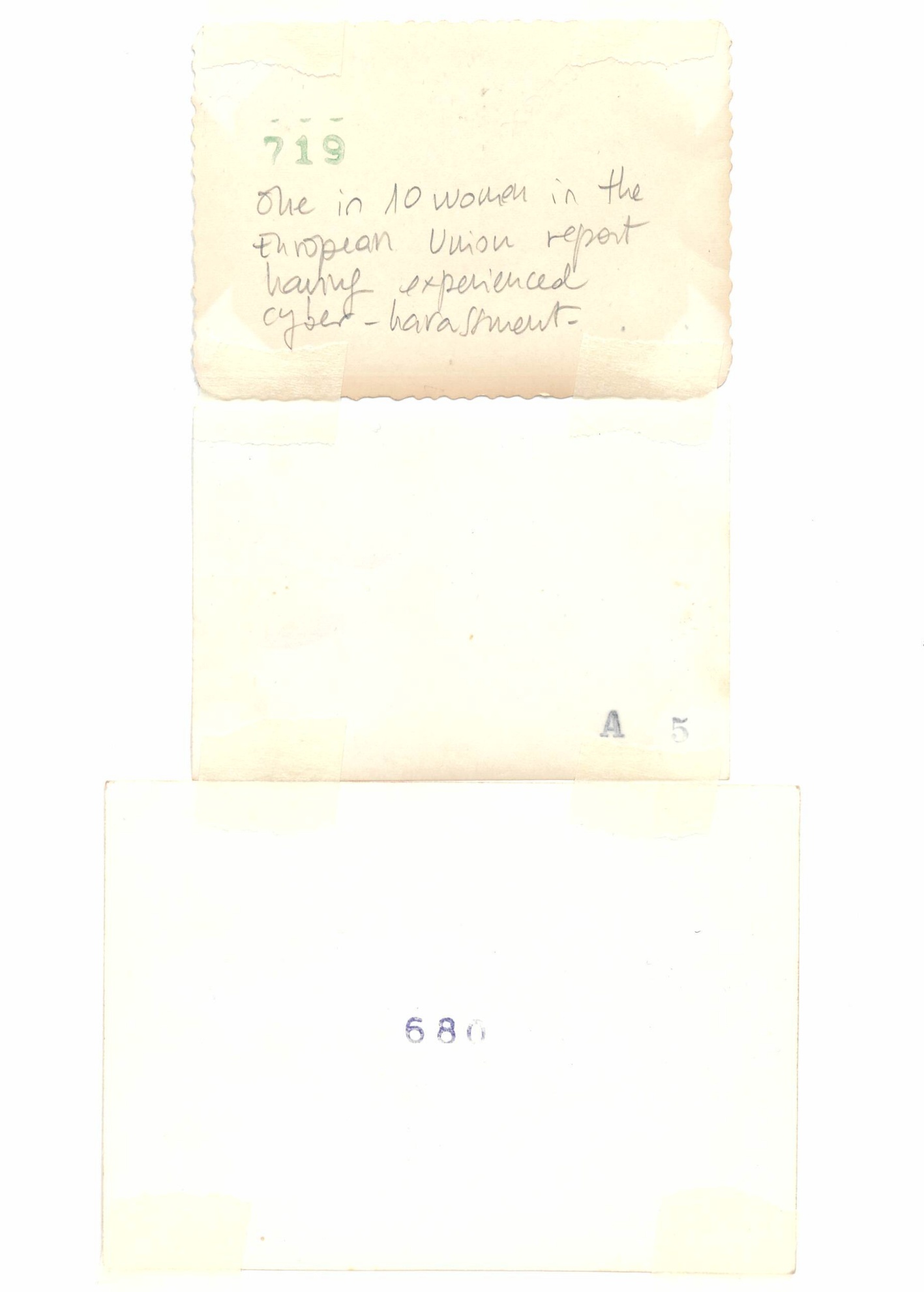 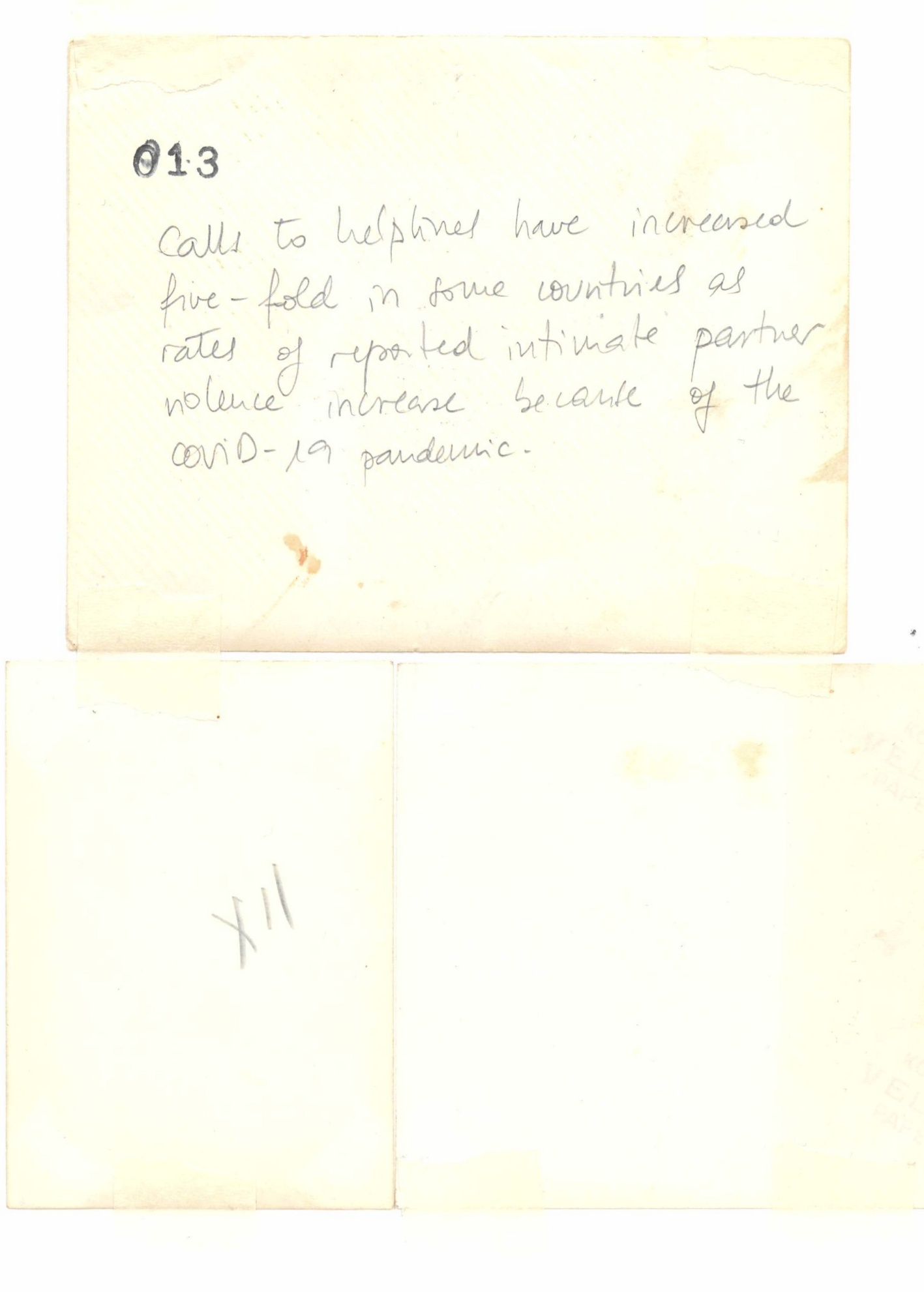 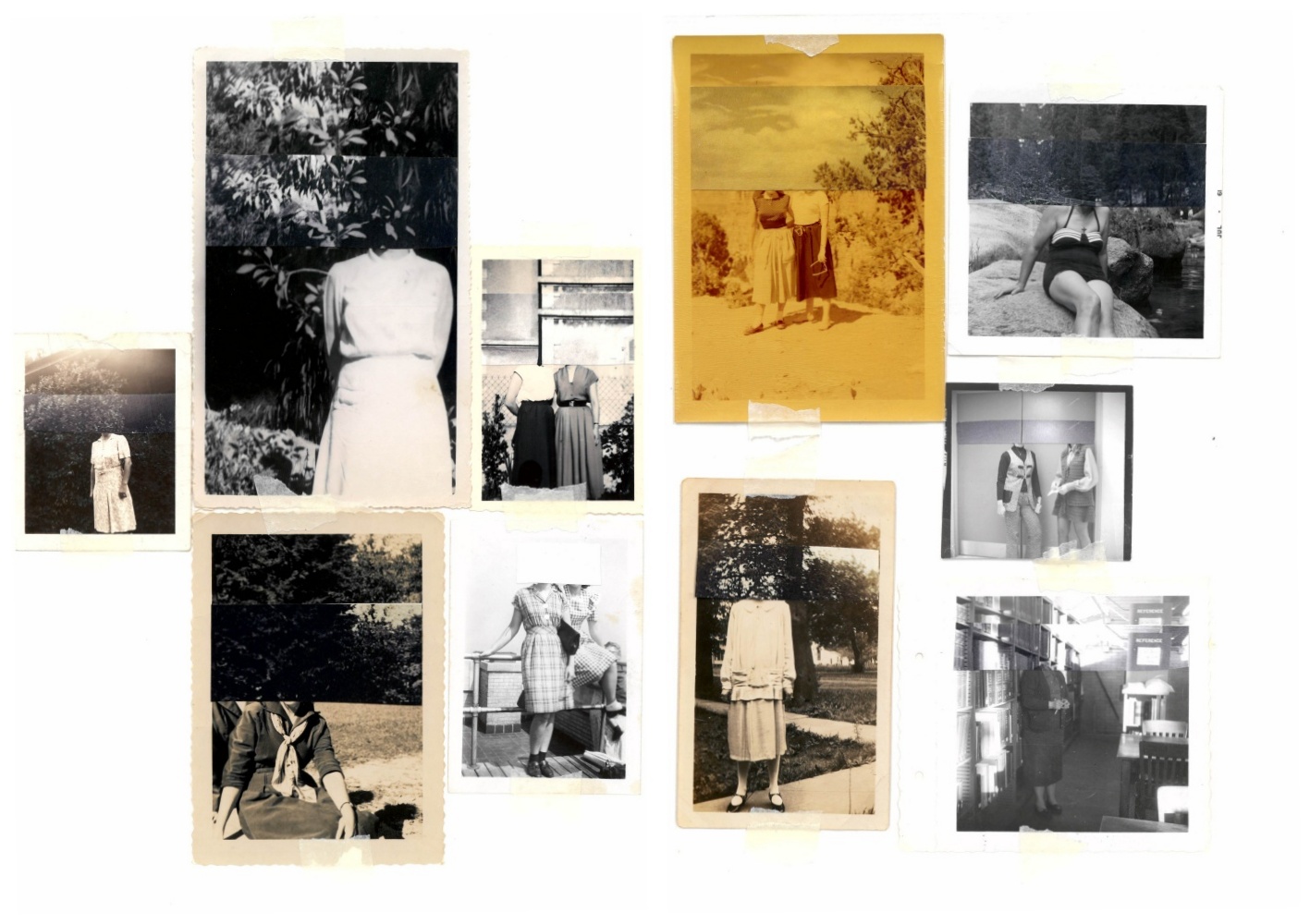 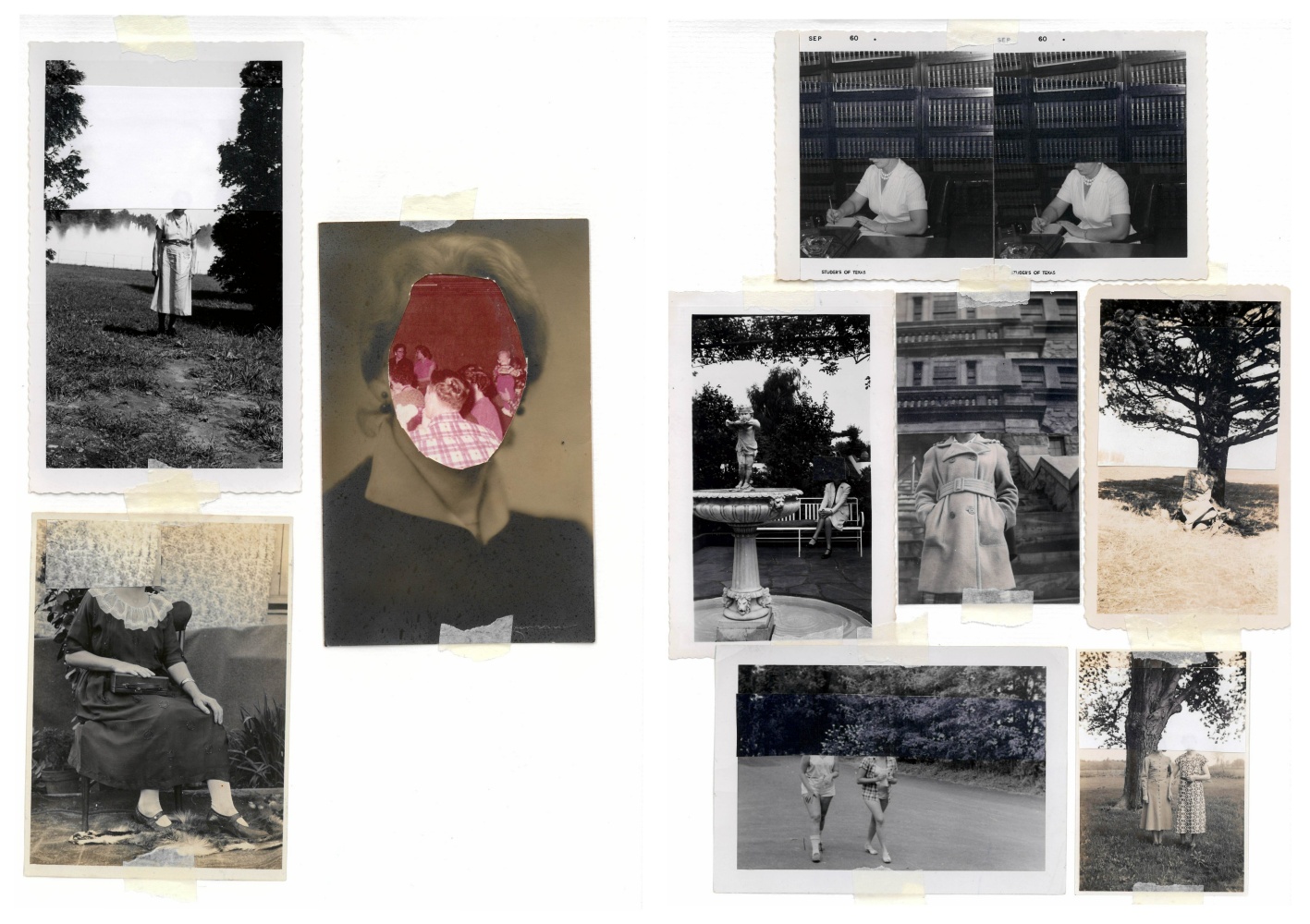 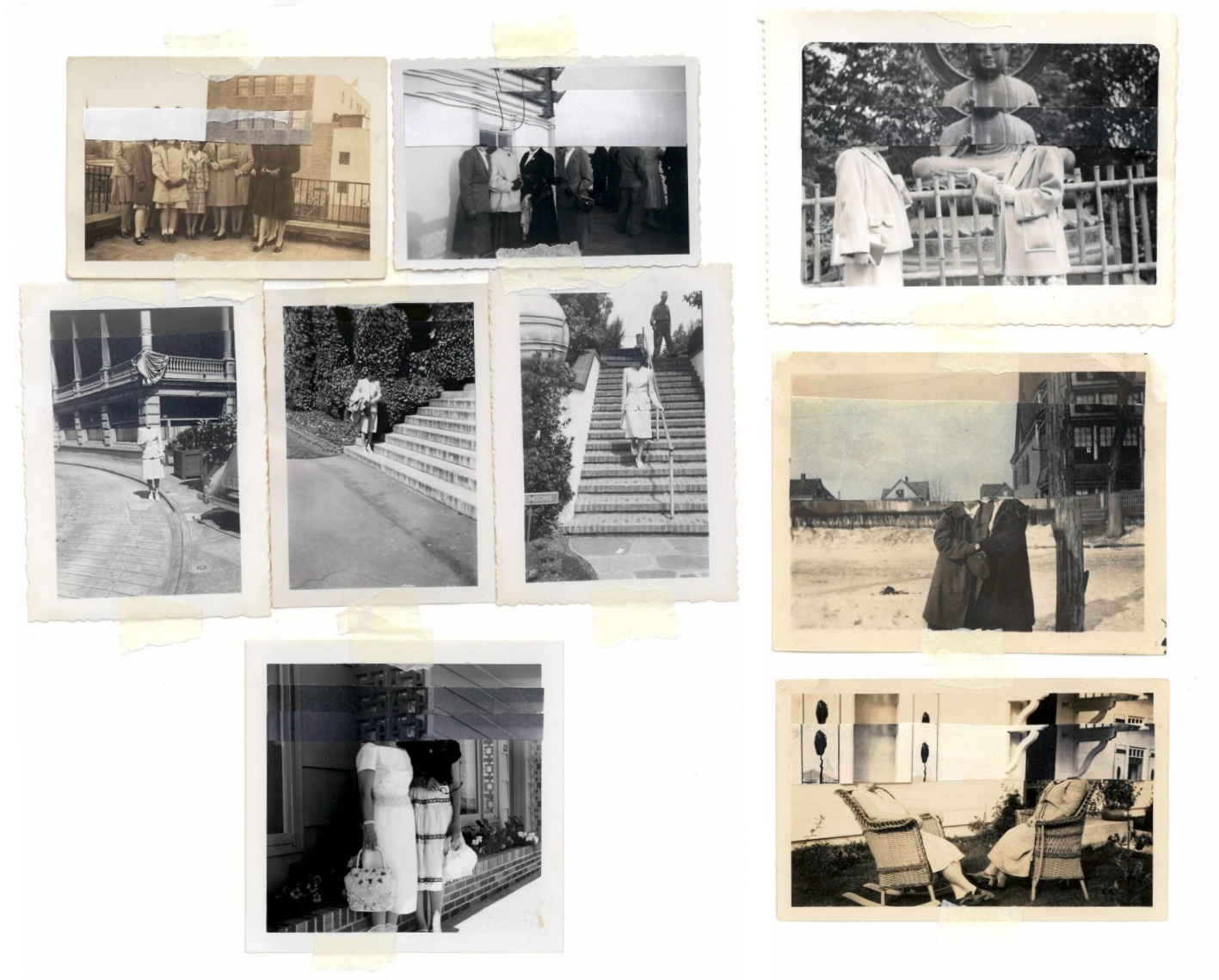 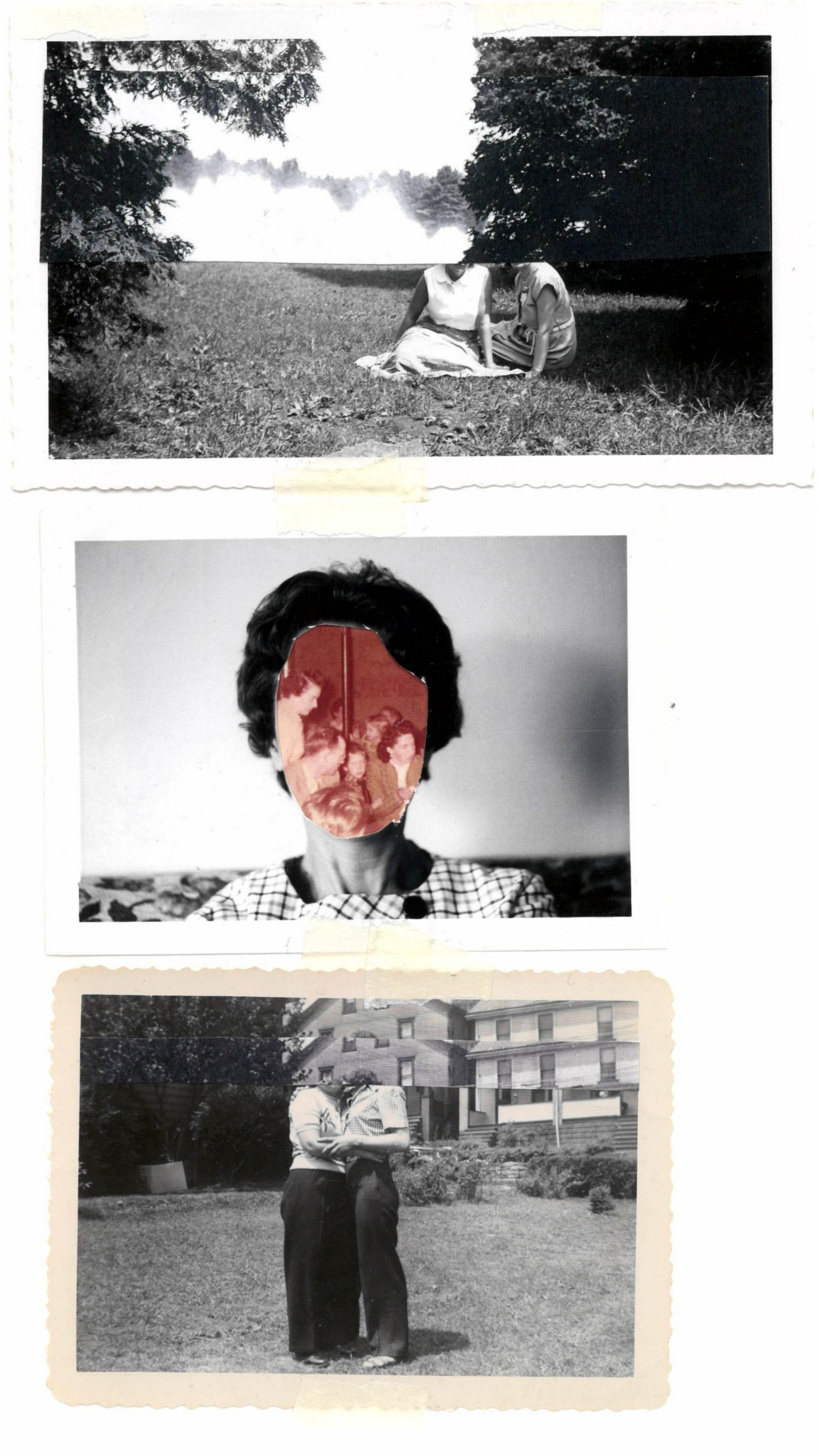 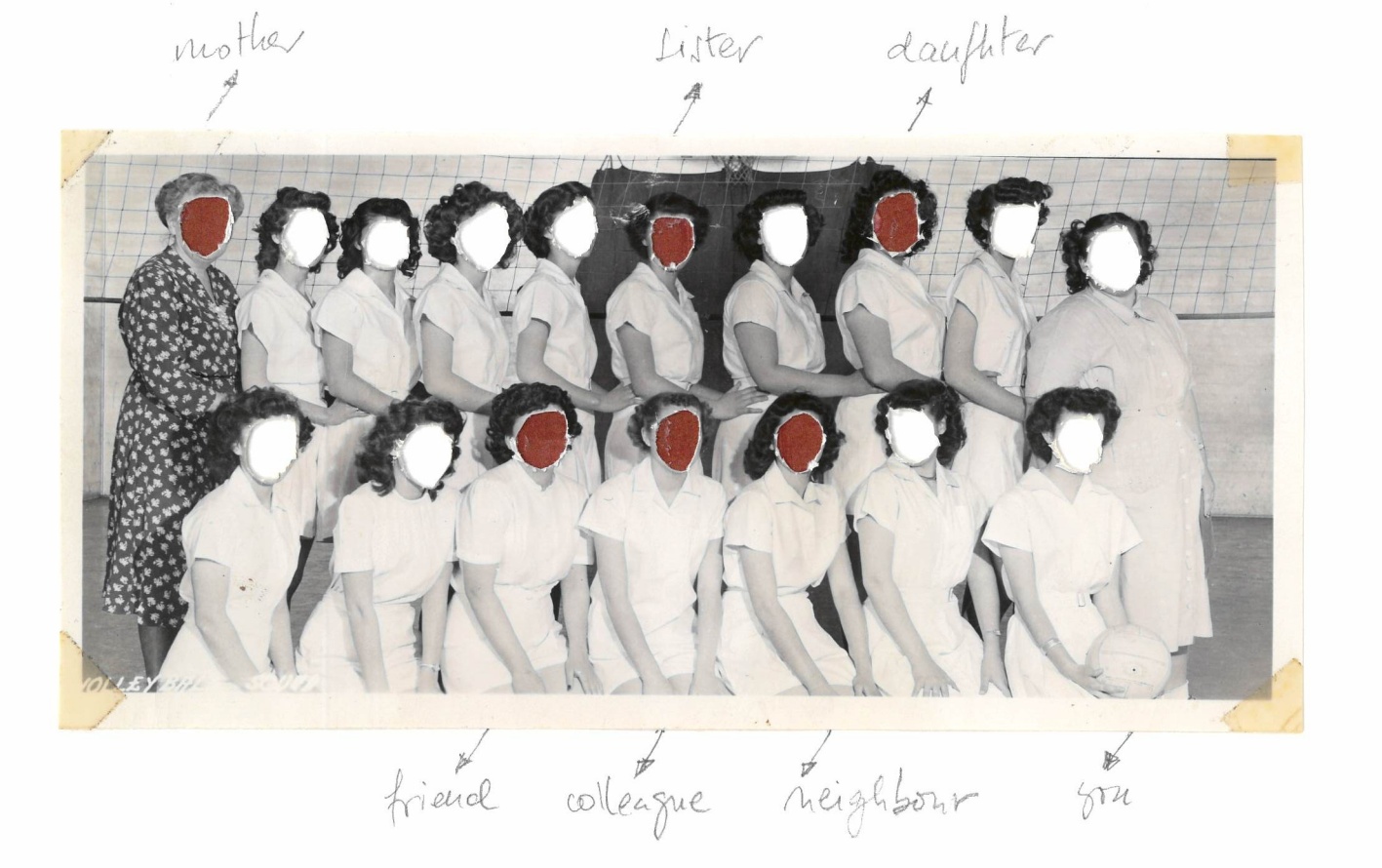 One in Three Women

The United Nations (UN) defines violence against women as any act that results in, or is likely to result in, physical, sexual, or mental harm or suffering to women, including threats of such acts, coercion, or arbitrary deprivation of liberty, which may happen in public or private. The UN estimates that one in three women will experience gender-based violence, but the fact it often happens in private makes such violence hard to quantify, visualize, or define. Often, stories about domestic violence go undocumented.

Speaking with friends and family, Nieves Mingueza was shocked to discover how many had experienced or witnessed gender-based violence and intimidation. Such stories are currently coming to light, with the encouragement of feminist movements such as #metoo, availability of data and a newly interested media.
One in Three Women is a fragmented visual, textual and cinematic assemblage which unfolds the subject of gender violence over different panels. Mingueza uses a multitude of image types in this work; from cinematic lo-fi exposures of domestic interiors and emulated forensic crime scene shots to collages created from family photo albums and texts taken from UN data. The visuals represent the tension between the increasing visibility of violence against women and girls in general and the persistent invisibility of such abuse in everyday life. In addition, the project addresses wider gender issues such the male gaze, and power dynamics within society.

The opening collage was made with a female group portrait found in a 1950s high school yearbook. Below this image Mingueza has handwritten ‘One in Three Women globally are subjected to violence’. In addition, she replaced a third of the women’s faces with fragments of red vernacular images, suggesting something bloody and visceral and reflecting the fact that one in three women is thought to experience gender-based violence. She also removed the other faces in the image, however, depersonalising the photograph in a bid to depersonalize the debate. This isn’t about individuals, she implies, it’s about a worldwide structural problem. The cuts Mingueza has made are rough and jagged, expressing her sheer rage about these facts. She adds a simple cross to shots of domestic interiors, transforming them into crime scenes just as violence transforms homes. And she also put a number to domestic objects, transforming them into weapons. Mingueza conceals the faces of other women in vernacular images, covering their heads by duplicating parts
of the scene, or turning the photograph over and inscribing UN statistics on the back of her. In doing so, she speaks of the violence that’s left out of the picture in family photos.

The final collage is a female group image where the women’s faces have been cut out, a third of the faces are red, again showing the percentage taken from the UN report. In addition, it is about connecting with the audience and creating awareness that some female member of your family, friends and close people may be suffering violence, including you.

Her work has been exhibited widely including installations at Les Rencontres de la Photography Arles (FR), Peckham 24, Royal Academy of Arts, Saatchi Gallery, Tate Modern, Tate Britain (UK), Fondazione Giorgio Cini (IT) and PhotoEspana (SP), among others. In 2019 her first monograph book was published by IIKKI books editorial. Mingueza’s work has been reviewed by multiple magazines such as the British Journal of Photography, Fisheye, Babelia El Pais, Der
greif, Lenscratch, Blind, L’oeil de la Photographie, Metal, All About Photo, Analog, Yogurt, Witty and Lensculture, among others.

She holds an MA in Documentary Photography and regularly contributes to talks and workshops. She is currently a PhD Student at LCC, UAL (London, UK).